Home > About Us > Our History 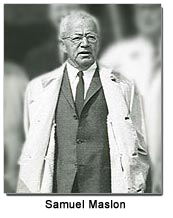 Although our firm was formally created by the merger of two law firms in 1956, its roots trace back much further to the graduation of its namesake, Samuel H. Maslon, from Harvard Law School in 1923. His distinguished tenure at Harvard included selection to serve as Notes Editor of the Harvard Law Review. Upon graduation, he became law clerk to Justice Louis D. Brandeis during the 1923 term of the United States Supreme Court. After concluding his clerkship, he returned to his hometown, Minneapolis, eager to begin his law practice.

During this period, anti-Semitism was a problem in virtually every United States metropolitan area, but was particularly virulent in Minneapolis, given its size and relatively small Jewish population. Consequently, Sam Maslon found it difficult to find a job at an established firm despite his impressive credentials. Determined to succeed, he started practice as a sole proprietor and began building a large and successful practice as a corporate and tax attorney. By the 1950s, his busy practice grew to include four associates, including Roger Joseph and Marvin Borman, another Harvard Law School graduate.

In 1956, Sam Maslon and his colleagues joined forces with a local litigation firm formed by two brothers, Sidney Kaplan and Sheldon Kaplan, and their friend Hyman Edelman. Collectively, they created the new partnership of Maslon Kaplan Edelman Joseph & Borman. The firm grew steadily by adding attorneys with unique and diverse backgrounds,

including lawyers who practiced on Wall Street, university professors, and bankers who were entering law as a second career.

The Honorable Irving R. Brand joined the firm in 1966, after working in the civil division of the Department of Justice, practicing law in Chicago, and serving both as one of the youngest judges in the history of the Minneapolis Municipal Court in 1951 and the first Jewish judge of the Hennepin County District Court in 1955. Eventually, the firm changed its name to Maslon Edelman Borman & Brand, LLP.

Perhaps because of the social circumst

ances which led to the firm’s founding, our firm has always held a deep commitment to strengthening the community and providing pro bono service to protect both individual rights and the collective rights of the disadvantaged. Of particular note:

• Sidney J. Kaplan was a dedicated public servant throughout his career. Of particular note, he served as head of the Claims Division within the Solicitor General's office during World War II. Later, Justice Robert Jackson recruited him as a member of the prosecutorial staff at the International Military Tribunal at Nuremberg, where he played an integral part in drafting the Conspiracy to Commit Aggressive Warfare count.

• Hy Edelman was an active community member and served as a member of the Board for Mt. Sinai Hospital. He proudly supported the cause of equal rights early in his career by serving on then-Mayor Hubert Humphrey's Council on Human Relations, which drafted the first city ordinance prohibiting discrimination on the basis of race, creed, or color. Later, another firm partner led the legal battle to desegregate the Minneapolis Fire Department and Minneapolis Public Schools. Both cases were undertaken under the auspices of the Minneapolis Chapter of the NAACP.

• Marvin Borman was a leading force in the local civic community. He served as Chairman for the United Way Campaign and was a member of both the Board and Executive Committee. He also served as Chairman of the Board of the Minneapolis Institute of Arts and was both President and Chairman of the Board for Mt. Sinai Hospital, the University of Minnesota Foundation, Temple Israel, and the Minneapolis Foundation. Among many other honors, Marvin received the United Way Distinguished Community Service Award in 1975, and he was the first recipient of both the Cardozo Society's Sidney Barrows Lifetime Commitment Award in 2000 and the Minneapolis Jewish Federation's Amos Deinard Distinguished Community Leader Award in 2001.

• In 1973, Maslon was one of the first major law firms in Minnesota to hire female attorneys and, in 2003, became the first to elect a woman, partner Terri Krivosha, as chair. Maslon was also the first recipient of the SAGE (Self-Audit for Gender Equity) Best Practices Recognition Award (2005) at the Annual Minnesota State Bar Association Bar Leader Conference. The SAGE Award is granted to legal employers who have made a significant contribution to the achievement of gender equity in the workplace. The nominees were reviewed based on the following factors: equal access, workday issues, governance, evaluation and promotion, retention, and compensation.

• In recent years, the firm has been involved in numerous cases which have—in one way or another—impacted the right to vote. In particular, partner Bill Pentelovitch led the successful representation of Senator Al Franken three times before the Minnesota Supreme Court in the canvass of the 2008 senatorial election. Bill also led a team of five Maslon partners in representing the League of Women Voters, Common Cause, the American Civil Liberties Union of Minnesota, and others in a challenge to a proposed amendment to the Minnesota Constitution which contained restrictive voter identification provisions; the amendment was ultimately defeated by voters in the 2012 election.

Today, the firm includes more than 90 lawyers who have the experience, depth, and skill to handle a wide range of legal problems. Although the firm has matured from its beginnings in the early part of the twentieth century, the character of the firm is still true to the dreams and visions of its founders. We are proud of our strong commitment to integrity and excellence in the practice of law as well as service to our community.

Continuing the Legacy: Our Commitment to AchieveMpls

Our firm's founding story is one of humble beginnings, considerable challenges, determination, and dedication—anchored by a profound commitment to Minnesota. We take great pride in carrying that legacy forward and celebrated our 60th anniversary by making a five-year $60,000 financial commitment to support AchieveMpls, the strategic nonprofit partner of Minneapolis Public Schools dedicated to closing the achievement gap by preparing inner-city students to meet challenges and accomplish their dreams of college, meaningful work, and a bright future—because helping the next generation succeed is the best investment we can make in our community.